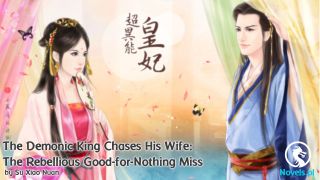 Yet, he had actually been frightened by this person? How embarrassing!

“Yuheng, why are you standing there like a fool? Perhaps you’re afraid?” a person behind him said with a chuckle. This person was Liu Yuheng’s companion, and he had discovered Liu Yuheng’s minuscule change in expression.

Liu Yuheng instantly flared up in rage, shouting, “Why would I be afraid?” He glared at Ling Han, and shouted, “Brat! You still dare to remain seated after seeing me? Have you grown tired of living?”

Even though Ling Han had been extracting energy from the Dimension Scroll this entire time, he wasn’t actually in a state of seclusion. Instead, he could stop whenever he wanted. It was just that he didn’t want to stop.

He swept his gaze over Liu Yuheng before saying impatiently, “Piss off!”

“Hahahaha!” Ling Han’s reply drew a round of laughs from Liu Yuheng’s companions.

“Liu Yuheng, this person doesn’t think much of you!”

“You’ve seriously embarrassed yourself! You were actually berated by some random nobody!”

They joked and laughed, and this caused Liu Yuheng’s expression to become increasingly dark.

Initially, he had only planned to teach Ling Han a lesson. Now that he was being taunted by his companions, a burst of killing intent instantly flared up in his heart. “You’re truly seeking death.” He resolutely lashed out, with his hands summoning the Great Dao of Earth and forming hundreds of meteors that viciously crashed down on Ling Han.

“Liu Yuheng is growing more and more powerful!” the man at the Sixth Heaven said. He was called Xu Huan, and he enjoyed the highest status out of the nine people. His words carried a sense of critique, and it was clear that he viewed himself as superior to Liu Yuheng.

“This Myriad Star Storm technique is Lord Liu Xun’s trump card. Even though Liu Yuheng can’t even replicate one-ten-thousandth of its true might, it’s still an extraordinary technique among those at the Fifth Heaven,” the woman at the Sixth Heaven remarked.

She was called Zhao Qing, and her background was similar to that of Xu Huan. However, her cultivation was slightly inferior.

“Hehe, it looks like Liu Yuheng is truly enraged,” someone said with a chuckle.

“Who told you guys to provoke him?” a young woman scolded.

Many of the men shook their heads, and said, “Well, that brat was seeking death anyway, so he can’t really blame anyone.”

They had only just entered this area, so they still hadn’t been affected by the black energy yet. However, as descendants of the elites from Heaven Transforming City, they naturally didn’t attach much value to human life.

So what if this person was killed? Who told him to be so unlucky?

Several hundred meteors crashed down, with each being as powerful as the full-power strike of a First Heaven emperor tier. This was naturally terrifying, and the surroundings were instantly obliterated and flattened. Dust and rocks flew into the air, forming a gigantic mushroom cloud.

“With the rumors praising him to the heavens, I thought that he would at least be more powerful than this. Who knew that he was actually this weak!”

“Heh, who the hell made up that rumor?”

Xu Huan and the others viewed Ling Han with utmost disdain. In fact, even the surrounding cultivators felt like they had been lied to. What kind of elite was this? He was as weak as an ant!

“Utter trash!” Liu Yuheng said softly as he clasped his hands behind his back. However, his words reverberated around everyone’s ears.

He was acting with arrogance and haughtiness. However, who told him to be so powerful?

“Whom are you calling utter trash?” a crisp and clear voice said from amid the dust and rocks. Everyone looked over, only to see a young man striding forward, with the chaotic Regulations unable to near him at all.

This person was naturally Ling Han.

All their eyes widened in disbelief upon seeing Ling Han stride forward in a carefree and casual manner. Even Xu Huan and Zhao Qing were slightly astonished by this. As Sixth Heaven Celestial Kings, they could naturally achieve this as well. However, Ling Han was only at the Fifth Heaven!

Liu Yuheng faltered for a moment before descending into rage again. “You merely blocked a single strike of mine. Is that anything to be proud of?” He was fearless at this moment. After all, he still had Zhao Qing and Xu Huan, two powerful elites. Moreover, he still had Heaven Transforming City, a colossal beast in this realm. Thus, what could a measly Fifth Heaven Celestial King do to him?

He lashed out again, drawing on the Great Dao of Earth as he made a grabbing motion. A fearsome halberd materialized in the air, and viciously thrust forward at Ling Han.

Ling Han’s eyes became ice-cold. Even though he was aware that he was a magnet for trouble, he was truly innocent this time. He had been sitting there and meditating, so whom had he provoked?

Right now, he was already at the Fifth Heaven. With his Body Art, power of Regulations, and Divine Demon Sword, it was entirely possible that his battle prowess could rival those at the Eighth Heaven. Even if facing those at the Ninth Heaven, he could still run away with ease and composure. Thus, did he still need to be afraid of anyone in this Celestial King Graveyard?

If he didn’t display his supreme prowess, were they all going to take him for a weakling?

The halberd instantly shattered into pieces, transforming into countless shards of Regulations that shot into the surroundings.

Liu Yuheng was astounded. He tried to dodge, yet how could he possibly escape from Ling Han’s grasp as a measly Fifth Heaven emperor tier? After all, he was no Ji Wuming or Xiao Yingxiong.

He was both infuriated and humiliated. As the son of Heaven Transforming City’s supreme elite Liu Xun, when had he ever suffered such misery before?

However, those who had witnessed Ling Han disposing of Luo Fuming before simply watched on with cold smiles. This person had already killed a Seventh Heaven Celestial King with ease, so what trouble could a measly Fifth Heaven Celestial King pose? They had already warned him about Ling Han’s strength, yet he had still insisted on charging forward to get his face smacked. Was he not asking for a beating?

However, many more people had only heard rumors about Ling Han’s strength before. Now that they were witnessing it with their own eyes, they couldn’t help but gasp and feel astounded.

Xu Huan looked up, with rage spreading across his face. However, he quickly suppressed his rage, and said calmly, “Release him. Then sever one arm and one leg. If you do so, I can forgive you.”

“Did you hear? Hurry up and release him!” another person immediately shouted.

Ling Han faltered upon hearing this. These people were far too arrogant! He looked at Xu Huan with a faint smile, and said, “Are you commanding me?”

“Release him. Don’t force me into action!” Xu Huan replied calmly. Even though he had witnessed Ling Han’s strength, he was still extremely confident in his own abilities.

“Young Master Xu, kill him! Kill this bastard!” Liu Yuheng shouted. “This person actually dared to humiliate me! I want him dead!”

Upon seeing this, everyone thought that Ling Han had chosen to yield. They all shook their heads.

“This can’t be helped. After all, these are people from Heaven Transforming City. That place is filled with ancient elites, and it’s said that each of them is powerful enough to massacre an entire city. If those people are offended, which force can withstand their rage?”

“Even though the Desolate Moon Alliance, Ten Thousand Dragons Alliance, and Seasons Alliance are brimming with elites and power, Heaven Transforming City is definitely no weaker than any one of them!”

Just as everyone was engaged in a spirited discussion, they suddenly saw Ling Han stomp down without any hesitation at all.