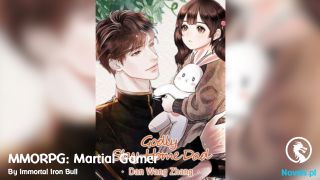 «A World Worth Protecting (Web Novel) - Chapter 833: The Xie Family!

“A Dharmic Battleship?” There was doubt in Wang Baole’s eyes. He stepped forward and took a closer look at the puppet. The closer look left him with more questions. The animal was clearly a puppet, yet there were some remnants of life inside its body.

Its level of cultivation didn’t seem to be at the Spirit Immortal realm typical of a Dharmic Battleship. It was considerably weaker.

“It seems like our fellow Daoist here doesn’t know anything about the Foundation Apes?” The bored old man glanced at Wang Baole before taking out a pouch made from animal skin. He placed the pouch in his mouth and took a deep breath. He looked slightly more energized after that.

“Please, enlighten me, Fellow Daoist,” Wang Baole said politely as he turned towards the old man and cupped his fists in greeting. He had noticed something strange when he had stepped into the shop. The old man seemed ordinary and had a listless, almost sickly look on his face, but Wang Baole couldn’t sense the level of his cultivation. Either he had a powerful artifact that was protecting him, or his cultivation was several levels higher than Wang Baole’s.

“The Foundation Apes aren’t creatures of nature. They are artificially created by the Xie family. The apes serve as protectors of the Xie family and act as location beacons. They may all seem to be at the Foundation Establishment realm, but depending on the quality of their make, each ape will have multiple seals of different levels inside their body!

“A Foundation Ape’s cultivation is enhanced by a full realm with the release of each seal. As to why their cultivation can be enhanced in this manner and how to release a seal, only the Xie family knows.”

“The one before you is broken. That’s how I managed to get my hands on it. Four of its seals have been released, but to repair it, I need materials. I also need to figure out how it works. That’s why it’s junk now. If it weren’t broken, the Xie family would’ve recalled it.” The old man slumped back into listlessness again. He held the animal skin pouch to his mouth and sucked in another breath.

He noticed Wang Baole looking at him when he looked up. His mouth split into a wide smile as he held up the pouch in his hand.

“Don’t know what this is either? Are you from some rural planet? This is a God Pouch. One breath of it can make you happier than a god. You’ll see wondrous things in your head. I have no idea which cursed person made this, but it’s got quite a kick. I think it came from the outer realms…”

The old man continued inhaling from the God Pouch as he spoke to Wang Baole. His words grew increasingly unintelligible near the end. Wang Baole didn’t pay much attention to what he was saying. He stared at the Diamond Ape puppet in front of him. An image of Diamy appeared in his head. Everything pointed to one thing. The Diamond Ape in the Ethereal Dao College was probably a Foundation Ape.

Xie Haiyang had popped up in the college… Everything seemed to fall into place. After some time, Wang Baole asked suddenly, “Is the Xie family very powerful?”

“The Xie family… This whole market belongs to the Xie family. There are more than a million such markets in the Never-Ending Dao Domain. The Never-Ending Clan themselves owe the Xie family loads of money. Does that answer your question?” The old man put his pouch down when he heard Wang Baole’s question. He turned and stared at Wang Baole with his dead eyes.

Wang Baole sucked in a cold breath of air when he heard that. He had always thought that Xie Haiyang wasn’t any ordinary person, but he hadn’t expected him to be so extraordinary.

“Xie Haiyang is really good at faking it,” Wang Baole muttered under his breath. He wanted to ask the man a few more questions, but he could tell the latter wasn’t very interested in answering them. After some thought, he gave the Foundation Ape puppet a considering look and then asked the old man how much it cost. He didn’t try to bargain for a lower price and got the puppet for ten Red Crystals.

The old man’s mood brightened instantly. He had just sold a broken Foundation Ape for a good price. He took a deep breath from his God Pouch, then approached and generously offered Wang Baole a storage bag to store the puppet.

Wang Baole basked in the feeling of being seen and treated as a rich man. Then, he coughed. He took the storage bag, which now held the puppet inside, and said coolly, “Sir, I’d like to know how the Xie family conducts their businesses and the type of business they do. Would you happen to know anything?”

The old man counted his Red Crystals and put them away. His face was glowing radiantly with a red light too. He laughed and told Wang Baole everything he knew.

“These markets form only one portion of the Xie family’s business. They have three main forms of business. First, they market civilizations and develop planets as tourist attractions. These planets become places where tourists can go and have a good time. They also sell… teleportation array formations. The massive teleportation array formations for cross-civilization travel are all made by the Xie family. Their third form of business… is quite interesting. It’s the main pillar holding the Xie family up!”

“They… invest in people who will become powerful cultivators in the future!” A mysterious look settled on the old man’s face when he said that.

An imperceptible light flickered in Wang Baole’s eyes. He casually asked a few more questions before cupping his fists and leaving the shop. Waves of emotions surged within Wang Baole as he made his way back.

He was very certain that Xie Haiyang was a member of the Xie family. He was also relatively sure that the Diamond Ape in the Ethereal Dao College was a Foundation Ape that had been placed there as a location beacon.

Xie Haiyang’s attitude towards him… needed no further explanation. He was fairly confident that he was one of many cultivators whom Xie Haiyang was investing his resources in.

Xie Haiyang’s got good taste. Wang Baole rubbed his chin and narrowed his eyes. The information that he had gotten for ten Red Crystals was worth it. He had also realized why Xie Haiyang had recognized him in the first place. Since he had chosen to invest in Wang Baole, then he must have some hidden means of locating Wang Baole quickly.

He understood why Xie Haiyang would want to be able to do that. No one wanted their investments to fail. If he were Xie Haiyang, he would do the same. What mattered was… what Wang Baole could get out of this!

So far, nothing bad has come out of our interactions. Wang Baole narrowed his eyes after giving the matter some serious thought. Even though there were slight differences between their species, the rules that governed the universe were similar no matter where one went. In which case… he simply had to make sure that Xie Haiyang continued to pour his resources into him. As Xie Haiyang’s investment in him grew… whatever happened to him would become Xie Haiyang’s concerns as well!

I’ll tighten the noose around him. Wang Baole grinned. He did feel some slight regret. It would’ve been so much better if Xie Haiyang were a woman.

With such optimistic thoughts filling his head, Wang Baole left the market. Once he was outside, he raised his right hand and waved. The Emperor Armor appeared instantly in mid-air and transformed into his Dharmic Battleship.

The Dharmic Battleship’s appearance was different. It looked more fearsome, and an overpowering sense of authority appeared to emanate from the locust.

Wang Baole surveyed the transformed Dharmic Battleship before him before entering it happily. With a loud thunderous boom, he steered the locust away from the market and straight into the cosmos!

Perhaps the Dharmic Battleship seemed too quiet. Wang Baole began to look around. Then, his eyes suddenly widened.

I’ve forgotten all about the donkey and Little Wu!

At that thought, Wang Baole hurriedly released Little Wu and the donkey. They had been sitting inside one of the self-destructing battleships in his storage bag.

Little Wu had a dazed look on his face when he appeared, while the donkey started prancing around madly. It brayed at Wang Baole incessantly, as if trying to tell him how it had been going mad from being trapped inside the battleship for so long.

Wang Baole had felt slightly guilty at first. He felt embarrassed for sealing the donkey away for so long for the second time. But as the donkey’s braying grew increasingly louder and as it continued to level an unhappy look at Wang Baole, Wang Baole began to feel that the creature was in need of some discipline, so he glared at the donkey.

“Stop it. It was for your own good. Look at how dangerous it is outside. Besides, you’re not the only one who was kept inside for so long!”

“Look at how obedient Little Wu is!” Wang Baole pointed at Little Wu and looked at the latter. Little Wu turned around, a dazed look on his face as he stared stupidly at Wang Baole.

Seeing Little Wu like that made Wang Baole feel more sheepish. Keeping him inside for so long must have turned the child into an idiot. Wang Baole glared at the donkey, which was giving him pitiful looks now. He coughed dryly and threw a supreme-grade Spirit Stone at the creature as a snack.

The donkey snorted air from its nostrils, then turned its head away. It didn’t spare the snack a single glance.

“Oh? Someone’s learned how to throw a tantrum, I see.” Wang Baole glanced at the donkey. With a slight flip of his sleeve, he pulled out ten Spirit Stones. The donkey trembled visibly. It was clearly trying to control itself. With another wave of his hand, Wang Baole pulled out a hundred supreme-grade Spirit Stones. They piled up like a tiny mountain in front of the donkey.

The donkey’s eyeballs were almost popping out of their sockets. It was even visibly drooling, but it seemed to be showing some spine this time. It forcibly twisted its head away again, causing Wang Baole to sigh. He pretended that he was going to store the stones and walk away. The donkey began to panic immediately. It lunged onto the pile of Spirit Stones and began munching noisily. It seemed to have learned the trick of wagging its tail while eating from somewhere.

The sight sent Wang Baole bursting into laughter. He ignored the donkey as it happily munched on its snacks. He then sat down and began to plan how he was going to strengthen his army during his trip back to the Divine Eye Star System!

I’ll have to speed things up when I get back to the Divine Eye civilization… find a way to get my hands on the complete Demonic Eye Art as soon as possible! Wang Baole narrowed his eyes as he thought of the hungry presence within his Demonic Eye Art. An icy glint flashed across his eyes.